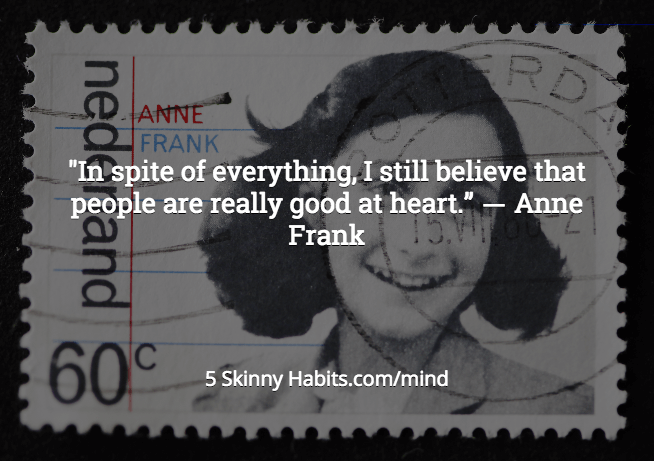 “It’s really a wonder that I haven’t dropped all my ideals, because they seem so absurd and impossible to carry out. Yet I keep them, because in spite of everything, I still believe that people are really good at heart.” ― Anne Frank, The Diary of a Young Girl

“I don’t think of all the misery, but of the beauty that still remains.”
― Anne Frank, The Diary of a Young Girl

If anyone had a reason for pessimism or doubting if people are good at heart, it was Anne Frank!  In May 1940, the Frank family were trapped in Amsterdam by the German occupation of the Netherlands. In July 1942, the family went into hiding in some concealed rooms behind a bookcase in the building where Anne’s father worked. After two years, the group was betrayed and transported to concentration camps. Anne Frank and her sister, Margot Frank, were eventually transferred to the Bergen-Belsen concentration camp, where they died in February or March 1945.

The 5 Skinny Habits includes Quotes from some of the greatest minds of all time about emotional and physical health, mindfulness, and habit formation, while presenting a practical program in order to make permanent changes, at the right pace.