How to get through work hungover 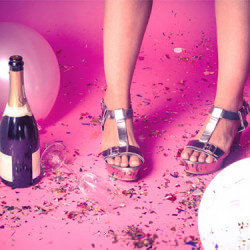 The Morning After
‘Tis the season for getting tipsy as our calendars fill with holiday parties, happy hours, and festive gatherings with family and friends. Chances are, you’ll wake up one morning from one of these shindigs with the telltale pounding headache, swimming insides, and general lack of will to live that comes with being hungover. And, unluckily for you, that morning you might also have to get up and go to work.The following tips won’t magically cure your alcohol-related afflictions, but they will help you deal with — and conceal — your hangover more effectively. Cheers to that.

Sweat It Out
No matter how nauseated I am, I often force myself to take a hot yoga class or at least do 30 minutes on the elliptical when I’m hungover. I don’t feel 100 percent afterward by any means, but I do feel somewhat more human. So as tempting as it might be to skip your prework gym routine, try to get your sweat on before work. At the very least, take a quick walk around the block, suggests David Zulberg, author of The 5 Skinny Habits: How Ancient Wisdom Can Help You Lose Weight and Change Your Life Forever. Ramping up your heart rate will help jump-start your metabolism, helping you feel better faster.

Hydrate Like It’s Your Job
The reason you’re hungover in the first place is likely because you didn’t drink enough water the night before. (Again.) Make up for it the next day by rehydrating the moment you get up, and then don’t stop — fluids are the key to counteracting your alcohol-induced dehydration. Zulberg suggests starting with just water. Then, rather than moving on to coffee or a sports drink, “an even better option is green tea, with added rosemary or lavender because they may also help with nausea,” he says. Bonus: Sipping tea at your desk is far more inconspicuous than double fisting a Gatorade and a coconut water.

Have Breakfast — Even if You Don’t Feel Like It
Before you get to work, be sure to eat something (and not a fast-food breakfast burrito, no matter how much you crave one). “Eating a greasy breakfast will most probably irritate your stomach and lead to nausea,” says Zulberg. “Stick to eggs, which contain cysteine and are a good source of protein. Have a slice of well-done toast, which may counteract nausea and low blood sugar. If you are not in the mood for solid foods, try having some cut-up cantaloupe or fruit. The fructose in fruit may help your body clear alcohol faster.” For lunch, a protein-packed turkey sandwich will help you get through the second half of the day.

Clean Up
Alcohol has a way of clinging to your breath and skin, creating a telltale hangover odor. (Ew.) To combat this, spend a little more time getting ready for work. Take a longer shower, shampoo twice, use leave-in conditioner so your hair at least smells good, and take extra time brushing your teeth. Also, mints. Don’t leave home without them. Be sure to combat those red eyes with drops — Visine works wonders for me — and really slather on the deodorant. There’s nothing worse than being hungover and then smelling last night’s martinis in the form of your own alcohol-infused sweat. Reapply both products as needed throughout the day.

Overcompensate With Style
You may feel tempted to wear dark colors and put your hair up in the hopes of just blending in, but doing so may make your puffy eyes stand out more. To draw attention away from you, brighten up your appearance and basically fake looking pulled together. “I definitely wouldn’t wear all black,” says sociologist and stylist Anna Akbari. “The challenge when you’re hungover is to not look disheveled. Going simple yet structured helps to boost your appearance — a nice dress would be a good way to go. One piece, no fuss, but instantly dressed up to downplay the lack of sleep and dehydration that’s likely showing in your face.”

Sleep In
First rule of mid-workweek drinking: If you know in advance that you’re going to be out partying until the wee hours, don’t schedule anything important for the following day. To give yourself a premeditated extra hour to sleep, use an email scheduler (like Boomerang for Gmail) to pre-write a message to your colleagues saying you’re going to be in bit later than usual before you go out, and set it up to send right before work hours the following morning. That way you’re not tempted to write a typo-filled “going to be late tomorrow” email at 3 a.m., which will certainly tip off everyone that you overdid it. If you didn’t plan in advance (one drink turned into four before you knew it), try to push your morning meetings to the afternoon. If your colleagues were out drinking with you, they’ll probably appreciate the gesture since some of them will likely be in the same hungover boat. If your office is one in which meetings are frequently rescheduled, no one will be the wiser that you’re simply not ready to face the day.

Pump Yourself Up
To make it through eight-plus hours of work while feeling terrible, do what you have to do to find the motivation to face your boss and colleagues like a professional. For example, before going into work hungover, a friend of mine sits in his car and listens to William Wallace’s iconic speech from Braveheart. (Seriously.) If Mel Gibson in a kilt doesn’t exactly do it for you, try the power of visualization to ground yourself before work: Picture yourself being productive and the day whizzing by. Unlikely on both accounts, but you’ll arrive at your desk feeling more positive about the day to come. Once at your desk, use music to keep you going — or at least awake — for the rest of the day.

Read more on Daily Worth: http://www.dailyworth.com/posts/3183-how-to-be-hungover-at-work